Remember, you, or part of your organisation, may fall within the scope of SECR even if undertaking public, or not for profit activities as registered companies or companies/LLPs owned by universities, academies or NHS Trusts. You are however not however required to report under the SECR framework at an organisational level if your organisation is defined as a public body, although you may still have other reporting requirements such as under the Greening Government Commitments.

The government encourages all private sector organisations in the UK which are not in scope of the legislation to report similarly, although this remains voluntary.

Under changes introduced by the 2018 Regulations, large unquoted companies and large LLPs are obliged to report their UK energy use and associated greenhouse gas emissions as a minimum relating to gas, electricity and transport fuel, as well as an intensity ratio and information relating to energy efficiency action, through their annual reports. Quoted companies of all sizes continue to be required to report their global greenhouse gas (GHG) emissions and an intensity ratio through their annual reports. Additionally, they are now required to report their total global energy use and information relating to energy efficiency action alongside the methodology used to calculate the new and existing disclosure requirements. 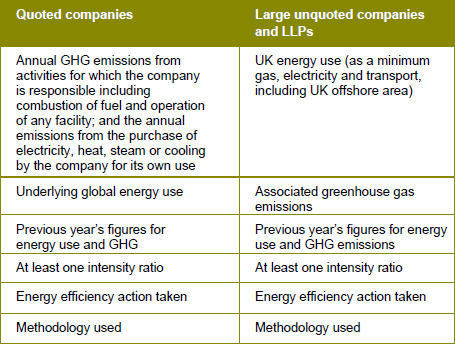 The new mandatory reporting requirements imposed by the 2018 Regulations are designed to:

Although businesses should make use of their normal accounting and environmental management systems to regularise the collection of energy use information throughout the year, additions or changes to existing systems or processes may be required to take account of the new disclosure requirements.

While SECR reporting requirements cover emissions and energy information for the current and previous financial year, organisations may also wish to voluntarily set forward-looking science-based emissions reduction targets. Organisations seeking to report on forward-looking financial risks and opportunities arising from climate change should consider reporting in line with the recommendations of the Task Force on Climate-related Financial Disclosures (TCFD). The TCFD has developed a globally recognised framework for making climate-related financial disclosures which the UK Government formally endorsed in September 2017.

Under changes introduced by the 2013 and 2018 Regulations, quoted companies of any size that are required to prepare a Directors’ Report under Part 15 of the Companies Act 2006, are required to disclose information relating to their energy use and GHG emissions. Quoted companies in this respect are those whose equity share capital is officially listed on the main market of the London Stock Exchange; or is officially listed in an European Economic Area State; or is admitted to dealing on either the New York Stock Exchange or NASDAQ.

Quoted companies within the scope of the legislation must continue as a minimum to disclose in their Directors’ Report their:

Additionally for financial years that start on, or after, 1st April 2019, quoted companies must also report:

Please note that the definition of “large” according to SECR differs from the one applicable to ESOS i.e. a company which EITHER employs 250 staff OR exceeds both €50 million (turnover) and €43 million (balance sheet total).

Unquoted companies and Limited Liability Partnerships in scope of the legislation will be required to disclose energy and carbon information in their accounts and reports, including:

Additionally, if you are an offshore undertaking (i.e. if your activities consist wholly or mainly of offshore activities as defined in the 2018 Regulations) you must disclose your emissions and energy use for the UK and the offshore area.

Again, please note that this is different to the approach taken under ESOS, where a smaller subsidiary of a parent company is not exempt, even where on its own, it would not meet ESOS eligibility criteria.

A corporate group is defined in the Companies Act 2006, and sections 1158 to 1162 of that Act explain how to identify if an undertaking is a parent to, or subsidiary of, another undertaking. You may wish to speak to your Finance Director in order to establish your organisation’s existing obligations relating to group reporting.

Where an organisation is a low energy user it is not required to make the detailed disclosures of energy and carbon information referred to above. Instead, such an organisation is required to state, in its relevant report, that its energy and carbon information is not disclosed for that reason. The following qualify as low energy users:

The legislation permits that certain information may be excluded:

For financial years that start on or after 1st April 2019, with the exception of the first mandatory reporting year, businesses in scope must also state the emissions, energy use and intensity ratio disclosures made in their previous year’s relevant Report. For financial years that start earlier than 1st April 2019, quoted companies are already required to disclose the emissions and intensity ratio disclosures if disclosed in the previous year’s relevant Report. Organisations are encouraged to disclose the previous five years’ performance, where possible, to show a longer-term trajectory and trigger discussions around changes in energy use or emissions over time.

Companies in scope of the legislation will need to include their energy and carbon information in their Directors’ Report as part of their annual filing obligations. The 2018 Regulations impose requirements on large LLPs to prepare an equivalent report to the Directors’ Report (the “Energy and Carbon Report”) for each financial year including their energy and carbon information. The Energy and Carbon Report must be approved by the LLP’s members and signed on behalf of the LLP by a designated member. The Energy and Carbon Report also needs to identify each of its members during the financial year. LLPs may wish to consider whether they can comply with the latter requirement by referring to the online list published by Companies House, if one is available. In the case of charitable companies, the reporting should be in the combined Directors’ and Trustees’ Annual Report.

Quoted companies have been required to make carbon disclosures in their Directors’ Reports since 30th September 2013. The new requirements, imposed by the 2018 Regulations on quoted companies and on large unquoted companies and large LLPs apply to reports for financial years starting on or after 1st April 2019. The table below gives an example of the first financial year for which the relevant Report must comply with SECR for organisations with different reporting year start dates. The first publication of reports which must comply with the 2018 Regulations is therefore expected to be filed with Companies House in 2020 (e.g. those which cover financial years to 31st March 2020). You will need to check what financial year your organisation uses. Usually companies have nine months to submit their annual reports after the reporting periods. For example for the reporting period 1st January 2020 to 31st December 2020 the deadline should be 30th September 2021. A special pandemic extension applied for the reporting period 1st April 2019 to 31st March 2020, with the deadline moving backwards to 31st March 2021 rather than 31st December 2020.  Check with your finance director or company secretary if you are unsure.

We use cookies on our website to give you the most relevant experience by remembering your preferences and repeat visits. By clicking “Accept”, you consent to the use of ALL the cookies.
Cookie settingsACCEPT
Manage consent

This website uses cookies to improve your experience while you navigate through the website. Out of these, the cookies that are categorized as necessary are stored on your browser as they are essential for the working of basic functionalities of the website. We also use third-party cookies that help us analyze and understand how you use this website. These cookies will be stored in your browser only with your consent. You also have the option to opt-out of these cookies. But opting out of some of these cookies may affect your browsing experience.
Necessary Always Enabled
Necessary cookies are absolutely essential for the website to function properly. This category only includes cookies that ensures basic functionalities and security features of the website. These cookies do not store any personal information.
Non-necessary
Any cookies that may not be particularly necessary for the website to function and is used specifically to collect user personal data via analytics, ads, other embedded contents are termed as non-necessary cookies. It is mandatory to procure user consent prior to running these cookies on your website.
SAVE & ACCEPT